Lesson 1: A Humanitarian from the Beginning

God the Uncreated One (King Forevermore)

The Bible begins with the simple phrase, “In the beginning, God.” (Genesis 1:1) Let that sink in for just a moment. Even before there was a beginning, even before there was time itself, there was God. You are a created being. God is not. God always was and always will be. Everything that is is from him and is his. What are the implications of this simple fact when it comes to having a proper understanding of who we are and who we aren’t?

In their 2016 song release, God the Uncreated One (King Forevermore), Aaron Keyes and Pete James explore all of the implications and ramifications of God’s timeless rule and reign.

Beginning with the uncreated creator, [God the Uncreated One] takes the singer through line after line of the rich, biblical imagery of God’s sovereign control and reign over his creation. He is the King, and in his kingdom, he rules over all men and every kingdom. Though each of these ebbs and flows at the sole discretion of his perfect will, God himself never changes. His word, his character, and his designs are as flawless and unchanging as his very nature. The song centers on the pillars of the gospel itself – Christ’s incarnation, death, and resurrection – and followed by images of heavenly praise. The king who reigns forever is crowned, exalted, and rightly receives the eternal honor due to his name. He is, as angels and men proclaim together, holy, holy, holy.

Each verse of the hymn emphasizes and expands on why God deserves our honor and praise as the one true King. Aaron and Pete’s words explore eloquently how this King is unique from all other earthly kings.

Be edified in the journey this song takes you on to explore the enormity of who God is, what he has done, what he is doing, and what this means for you and me. He is indeed the King forevermore. Praise him. Proclaim him.

God is God, and I am not and never will be, and that’s a good thing.

I am not God and never will be. I am a sinner in need of a perfect God to rule over me and save me. Like all fallen humanity, I am responsible for the crucifixion of the perfect Son of God for the world’s sins. I, a created being, required rescue, and the Lord of the Universe rescued me.

God, the King, and ruler of all things, loves me and wants me to be his own forever. God has never changed and never will. God had a plan to create and save the world. He is deserving of all praise. 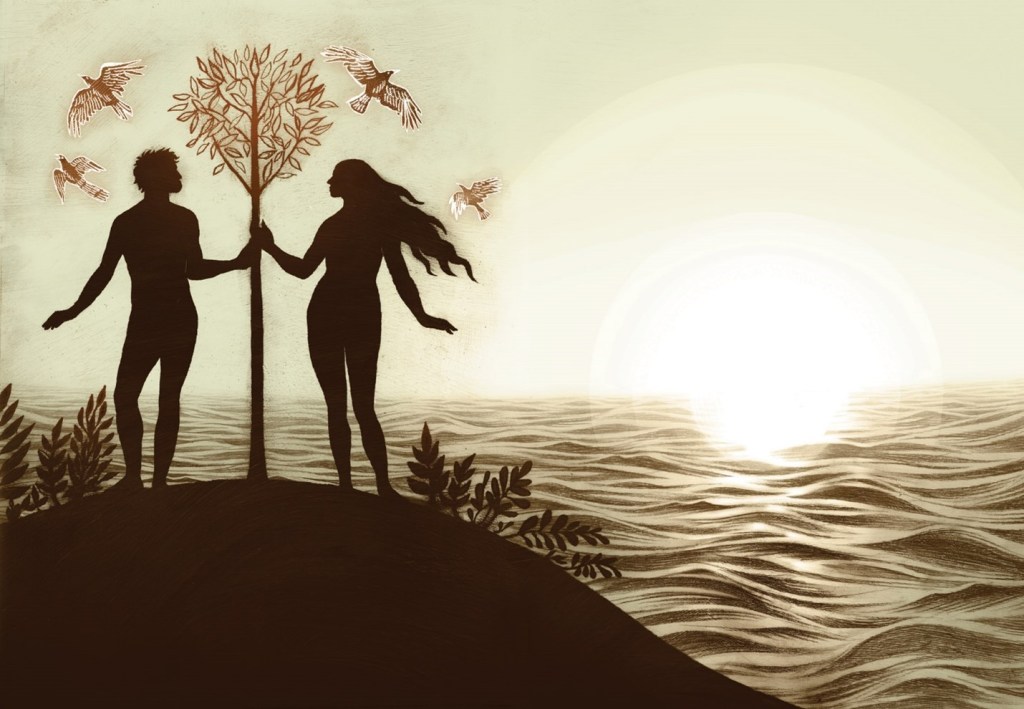 And God said, Let us make man in our image, after our likeness: and let them have dominion over the fish of the sea, and over the fowl of the air, and over the cattle, and over all the earth, and over every creeping thing that creepeth upon the earth. So God created man in his own image, in the image of God created he him; male and female created he them. God blessed them and said to them, “Be fruitful and increase in number; fill the earth and subdue it. Rule over the fish in the sea and the birds in the sky and over every living creature that moves on the ground.”

God created Adam and Eve to fill the earth with more humans and to rule over all the world.

In the beginning, God made Adam and Eve perfect and holy. They were without sin, and their will was perfectly in line with God’s will. The man and woman, Adam and Eve, are naked, showing how man and woman lived together in perfect harmony before sin. After they sinned, they hid immediately.